Dr. Cherry received his Bachelors of Science in Accounting from Norfolk State University; his Masters of Business Administration from Troy University; a Master of Science in National Resource Strategy from the Industrial College of the Armed Forces, National Defense University, Washington, DC, and a Doctor of Philosophy (Ph.D.) in Organizational Leadership from Regent University, Virginia Beach, Virginia.

Active in professional and community organizations, Dr. Cherry is a member of the American Society of Military Comptrollers, the National Defense University Foundation and the Norfolk State University, Military Alumni Chapter. He holds life memberships in the Finance Corps Association and The ROCKS Inc., and the Omega Psi Phi Fraternity, Inc. He has received numerous awards and honors to include the Legion of Merit, inducted into the Norfolk State University Military Hall of Fame and was designated as a Distinguished Member of the Finance Regiment.

Ms. Benson has been associated with Succeed to Lead since its inception in June 2007, as the Executive Vice President. As the Executive Vice President, Ms. Benson is responsible for the overall day-to-day operations and administration of Succeed to Lead, LLC. Ms. Benson also assists the CEO in the corporate, strategic and business planning, financial management oversight, and corporate business outreach. She participates and donates her time to community and social activities as she serves and works with several organizations and foundations.

Ms. Benson has worked in Financial Management and Budget for 25 years. She has demonstrated excellence in PPBE (Planning, Programming, Budgeting, and Execution), Army and Marine Corps financial management systems.

Ms. Benson holds a Bachelor’s of Science in Accounting from Norfolk State University and a Master of Divinity from Regent University.

Ms. Jackson joined the Succeed to Lead team as the Director of Contract Administration in August 2011. Some of her responsibilities include cost estimating, invoicing, and contract reconciling. She also advises management on contract efforts and serve as the focal point for all contractual efforts.

Ms. Jackson has over 35 years’ experience within the commercial and federal sectors. She has served as a Comptroller, Director of Contracting, Program Manager and Financial Manager with the Office of the Under Secretary of Defense and the Army. Ms. Jackson has Planning, Programming, Budgeting and Execution (PPBE) experience to include formulating the Program Objective Memorandum (POM). She is an experienced international project manager, coordinator, and trainer of financial management and accounting reconciliation of Defense and Commercial Programs and an accomplished financial manager. Ms. Jackson is also experienced in auditing Department of Transportation grants and contract administration.

Ms. Jackson holds a Bachelor’s of Science in Business Administration and Management from Regis University, Denver, Colorado. She is also a Certified Defense Financial Manager.

Mr. Laver joined the Succeed to Lead team as a Personnel Officer and Business Development Manager in January 2015. He took over the Human Resource duties in March 2017. He is responsible for all the personnel matters involving the Company. These duties include on-boarding new employees, Benefits Administration, Employee records, interface with our payroll and personnel accounting systems. He also provides administrative support as needed.

Mr. Laver has over 45 years of administrative and personnel experience with the United States Army in the Active, Reserve and Civilian components. His last position was with Headquarters Department of the Army, Chief Information Officer/G-6 as the Chief, Human Resources Division. He also served as the Director of Administrative Support, Army Management Staff College from its inception thru 2003. His assignments with the Army included tours in Thailand and Panama. He retired from the Army Reserves as a member of the 310th TAACOM.

Your Success is Our Succcess!

Read more about who we are by clicking on the links below.

Succeed to Lead, LLC., is geared toward helping experienced organizations and professionals rise to the next level of success by developing leadership knowledge and skills, decision-making strategies, and practical approaches to today’s business and life issues. 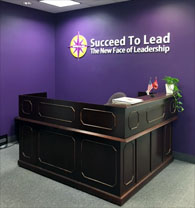